I used to play in a band back in San Jose with a few dudes and we were not that great.  We did have a lot of fun and for some reason people like to see us play fast shitty songs.    Aaron was in this band and he was by far the best musician.  After we stopped making music, I was living in San Francisco and then I moved to Los Angeles.  We kind of lost touch.  I feel guilty about it a bunch. 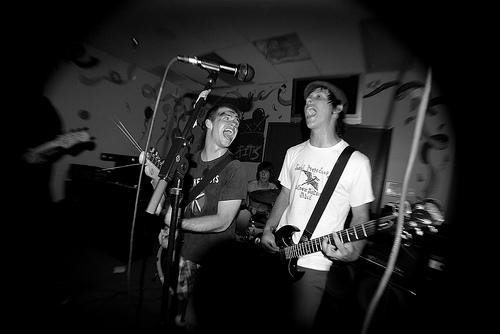 I always followed the music he and Ryan were putting out in Communist Kayte.  Sadly, that band broke up this year. They had a rough time keeping a drummer.  Anyways, I still love his sense of humor and songwriting.  I was pleasantly surprised today when he dropped a really creative and unique record under the moniker “Cry For Help”.  It’s funny that we used to play in a band together now we each play in a band where we play all the instruments. 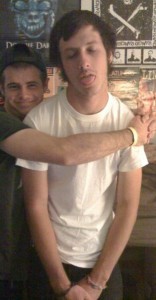 If I remember correctly, Aaron and I saw that documentary American Hardcore together.  We met Pteradon that day they sat in the row in front of us.  We were the only folk in the theater.  In that film,  Ian MacKaye talks about writing a short song and saying exactly what was on his mind and do it in 30 sec.  “Terrible Songs Recorded in Terrible Places” is 13 song record that clocks in at a total of 4 minutes.  Aaron is sad, depressed and dissapointed and tells us this in 13 different extremely short songs.   Dan at the punk house took the record title literally and thought the songs would be recorded in places like bathrooms and churches.  He was suprised at how good the recordings were. Aaron recorded, mixed and mastered the record.  Aaron plays all the instruments on this and has his friend Sean sing. I like Aaron’s voice but on his bandcamp it says that he hated his voice. The record is really well made and I have listened to it maybe 20 times.  It is raw, unapologetic and intimate while being funny.  I really fucking love it.

Intro – Aaron let’s us know what we will hear.  Suicidal, depressed songs that are short and in a fun pop punk way.  I was instantly on board in this intro.

Ambien – Love song to Aaron’s favorite drug.  I remember when he would talk about his ambien trips.  Nothing in this song is fake.

Becoming A Loser – As an ex-straight edge kid I really identify with this song.

Girlfriend & X-Girlfriend – 2 songs that made me laugh not for the subject matter but for the deeper meaning of using the same music but changing the lyrics to talk about the same girl.

Jump Off A Bridge – This is the longest song.  This is the most traditional of all the songs.  It is really fun look at depression.  I have always loved sad songs sung happily.

This record was self released on Bandcamp.  I would put the record out on vinyl. It is just a refreshing punk record.

Listen to whole record it is only 4 minutes!